As part of the Farmers’ Club project in Bolikhan District, one group decided to set up their own community-based organisation (CBO) at the end of the overall Farmers' Club project. The CBO, FG456 in Ban Phameuang, succeeded in receiving funding from the Global Environment Facility (GEF) for purchasing 200 Household Biomass Gasifiers. These gasifiers are fuelled by rice husk, a leftover product from milling rice. Household Biomass Gasifiers do not release any smoke or other emissions which are harmful to people’s health and the environment. Traditionally, villagers cook over wood or charcoal fires which constitute a health risk, especially when burnt indoors, while also contributing to deforestation.

The task of collecting firewood usually is one of the many responsibilities of women, and thus the gasifiers also help with relieving them from having to do so, thereby furthering women’s empowerment. Moreover, after the rice husk has been gasified, the resulting biochar can be used to enhance organic fertiliser in vegetable gardens. HPP Laos supported FG456 in every step on the way, from applying for funding over distributing gasifiers to training families in how to use and maintain them, as well as raising awareness of climate change mitigation and adaptation in the community.

Mr. Tengzong, one of the participants, explains: 'I like the gasifiers very much because we can use waste from the rice harvest (rice husk) to make the fire. We don't normally use the rice husk so we save money on it, instead of buying charcoal. It is good for the environment because we do not need to cut down the trees for firewood. We have no smoke in the kitchen when we cook the food, and smoke is not healthy for my family. We also get biochar from the rice husk after it has been used in the gasifier, and we can mix it with animal dung and use it in the garden as fertilizer.' 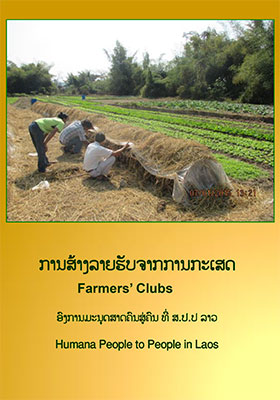